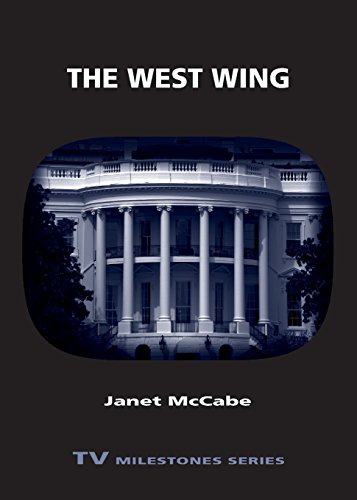 Críticas ""The West Wing is one of the most acclaimed network television series of the last decades, and until now one of the least analyzed. Janet McCabe's fine work has addressed that omission with a concise and highly readable account that will be useful to anyone interested in American culture and media.""--Michele Hilmes ""author of Network Nations: A Transnational History of British and American Broadcasting ""This well-researched, clearly written, and informative view of The West Wing will be appreciated by both media scholars and TV aficionados alike. McCabe's book follows in the televisual 'Tradition of Quality' exemplified by the primetime program itself. Combining behind-the-scenes insights with an integrative cultural studies approach, the volume focuses on the television industry, as well as on the show's political and thematic relevance, televisual auteurism, and the aesthetic dimensions of narrative, characters, and TV stylistics. This volume could serve as a work of scholarship, a course textbook, or just a great read for fans of 'the best drama on network television.'--Frank P. Tomasulo ""guest professor of television studies in the Department of Film at Sarah Lawrence College ""Both volumes adhere to the series' promise of lively and accessible writing. Though they are undoubtedly academic studies invested in making a case for each programme, both McCabe and Vint write with energy, making their studies light but not insubstantial. They will be ideal for undergraduates wanting to fill in their understanding of a particular programme and also have potential for compact contributions to ongoing debates around authorship (and thereby studies of Sorkin and Simon as television authors), quality, politics and aesthetics. Although their diminutive size could constitute a drawback for books addressing television programmes which are distinguished by their complexity, the extent to which each presents a focused and exacting critical argument increases the significance of their contribution to the field. These short monographs made me want to rewatch The West Wing and The Wire, having drawn out some of their key pleasures and reinvigorated some critical questions to take back to each series. This is a measure of the books' skill and value.-- (11/01/2014) Reseña del editor With its fast and furious dialogue, crackling wit, and political savvy, The West Wing became appointment TV for millions during its seven-season run between 1999 and 2006. The behind-the-scenes ensemble drama about Washington politics premiered on the wake of the Monica Lewinsky scandal, was the first series to respond to the 9/11 terrorist attacks, and concluded in the closing years of the Bush administration. Its subject matter was ambitious and germane, its cast star-studded, its production team acclaimed. In this volume, Janet McCabe explores The West Wing as both a space for political and social discourse and a force that reshaped contemporary television. McCabe begins by examining the series' broadcasting history, including its scheduling in the United States and around the world, and how the show defines channels and television markets. McCabe goes on to explore the role of the show's creator Aaron Sorkin as a TV auteur and investigates the program's aesthetic principles, including the distinctive look, feel, and sounds of the series. McCabe concludes by considering the political discourse of The West Wing, as the show spoke back to a U.S. culture divided by politics, race, and gender as well as the trauma of 9/11 and anxieties over terrorism and the wars in Iraq and Afghanistan.   McCabe's analysis of The West Wing provides an intriguing look at the institutional, formal, and cultural politics of television. Fans of the series as well as students and teachers of television history will enjoy this detailed volume. Ver Descripción del producto